This really is as exciting as hearing a new XTC release – and it’s a long time since that happened.

While Andy Partridge has maintained a steady flow of collaborations and songwriting credits since the demise of the band, very little has been heard from Colin Moulding. He’s taken his bass out for Anton Barbeau, sung for Billy Sherwood and Days Between Stations, and appeared on covers of It’s Raining Again and Brain Damage, but the last Moulding song to be released was Say It on the Apple Box set over a decade ago – and even that had been recorded in 2002.

The 15-year wait is but nothing compared with the 35-year hiatus during which Terry Chambers was not only out of XTC but out of the country. Now back from Australia with his Swindon accent in tact and his drumming muscles undiminished, he provides the tight rhythmic backdrop for the four Moulding compositions on the Great Aspirations EP.

And what a collection it is.

Although only half the band is represented, the EP has XTC’s characteristic qualities of melody, rhythm, variety, idiosyncratic subject matter and rootedness in the landscape. Ever since he found his songwriting voice on Drums and Wires with a set of songs about parental aspirations, workplace tedium and social conformity, Moulding has ploughed his own Wiltshire furrow, specialising in an appreciation of the good things, which for him means friendship and fruit, landscape and longing. You’d call it nostalgia were it not fuelled by an understated political anger. He is a conservationist reminding us of what we stand to lose in the name of progress.

Nowhere more is this the case than in Kenny, the third song on the Great Aspirations EP. Only the author of Fruit Nut and Ball and Chain could have written this eulogy to the public sports field and only the author of Ten Feet Tall could have made it so catchy.

Funnily enough, it’s driven by the kind of stupidly happy guitar rhythm Andy Partridge is drawn to as it paints its quintessentially English picture of allotments, muddy fields and monkey bars, a landscape once enjoyed by the ordinary people (where did they go?) but increasingly sold off by councils to property developers. Where once Kenny took to the public recreation ground to learn his footballing skills, now “bungalows will settle the score”.

(“He sounds very West Country there,” says my wife wandering through the room, reminding me how certain Colin is in his own voice, how firmly rooted in his home territory.)

All this and a trumpet by Alan Bateman that’s straight out of That Is the Way. In fact, the whole EP has the feel of XTC circa 1979–1983, partly because of Terry’s crisp drumming (oh, that drumming!) and partly because of its rich and spacious musical detail.

Certainly, it doesn’t seem such a big leap from the driving piano of 1984’s Washaway to the keyboard motif that takes us into Scatter Me, the EP’s opener. It’s a glorious song that would have felt quite at home on Mummer thanks to Colin’s soaring melody and Terry’s robust drumming. Existing in the space between Andy’s Chalkhills and Children and Colin’s Dying, it’s a celebration of life and landscape and a happy acceptance of mortality. “One day soon I’ll be a particle,” Colin sings, claiming his place in the (season) cycle of regeneration. Who else is writing songs about scattering their ashes? And who else is making them so compelling? 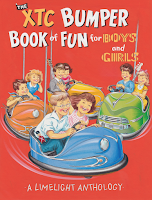 I’ve been itching to share my enthusiasm for Greatness (The Aspiration Song) since February when Colin and Terry played it to me after I’d interviewed them for The XTC Bumper Book of Fun for Boys and Girls. It takes a brave songwriter to name-check Churchill, Hitchcock, Spielberg, Gershwin and McCartney, but then there’s always been something fearless about the way Colin heads off in his own direction. And coming straight after the intimations of mortality of the first song, Greatness shows his life force is ticking away quite nicely, thank you. “It’s old fashioned to aspire,” he sings, even as he sets the bar for other songwriters to aspire to.

If the closing number, Comrades of Pop, doesn’t reach the same dizzy heights, its combination of spoken-word commentary and dazzling percussion (from the drummer who brought us Living Through Another Cuba) is nonetheless a singular contribution to the EP. Colin is hardly the first musician to reflect on the iniquities of the music business, but having served his time, he’s entitled to take a wry look back at the way money and lawyers have a way of tearing apart “high-school buddies” and their youthful idealism.

I’d write a load more, but hey, I can’t wait to listen to it all again. Please could we have some more?